When most people think of hubs of innovation and scientific inquiry, they name locations like Silicon Valley, the futuristic Osaka Japan, or our very own Research Triangle Park in North Carolina.  For Dr. Craig Lowe, Amish country served as his scientific muse.  Growing up in a town adjacent to these tech adverse communities, he was surrounded by dairy farms and it was there where he was introduced to livestock and became fascinated with vertebrate species. A young Lowe probably pondered questions like: why does the cow have its spots and why do chickens have wings but can not fly? His interactions with these domesticated vertebrates was where he first developed an interest in evolutionary biology because of the array of morphological and adaptive diversity present.  His curiosity persists and and adult Craig Lowe continues to ask questions like why does the lion have its mane and where did the cheetah get its spots?  As well as questions that delve into how genetic changes can affect the expressed phenotype of an organism.  Although Dr. Lowe has a love for many vertebrates, he exuberantly declares humans as his favorite and he actively studies how human adaptations, shaped by evolutionary forces, effect the current manifestation and expression of diseases.

The pathway from a childhood in the Pennsylvania countryside to a laboratory at Duke took an unconventional route, and although Dr. Lowe has expressed an interest in the biological systems of the living, he began his academic career at the Cornell School of Engineering studying the complicated systems of computers. He used his computational skills in his PhD program at The University of California Santa Cruz to study vertebrate genomes, and his postdoctoral studies at Stanford presented the opportunity for him to blend his two interests and pursue knowledge regarding computational genomics and experimental genetics. Now, conducting research in a lab at the Duke University Medical School, Dr. Lowe stated that in many ways he still considers himself a computer scientist.  He melded the tech savvy skills he developed as an engineering student with his interest in vertebrate biology and morphology to pave his own road.  This is not an easy task, the fusion of unconventional fields could have been a path without guidance, but Dr. Lowe was accompanied by mentors in the field of computer science, developmental biology, and genomics.  When reflecting on his academic career he says that if he could go back, he would tell his past self to not be too worried about having such diverse interest.  That in fact, these interests would be his strength.  The many facets of Lowe’s academic pursuits have allowed him to be dynamic in a field that is anything but stagnant.  The nature of evolution is that it is in motion, and Dr. Lowe’s multidimensional knowledge has allowed him to be adaptable and to find his niche in bioinformatics and computational sciences.

Dr. Craig Lowe’s current lab uses a multiple model system.  This means that on any given day you will find students studying a variety of animals including fish, mice, and chickens, as a means to inform questions about basic biology and evolution.  If you are interested in exploring questions about how orthodontal diseases have emerged because of the slow evolution of jaw morphology or understanding how some evolved human traits can increase human disease risk, consider exploring ideas being produced in the Vertebrate Genetics Laboratory. 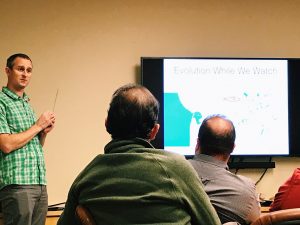 Dr. Craig Lowe is an Associate Professor of Molecular Genetics and Microbiology at Duke University.  If you are interested in his work, he encourages students of all levels to reach out to him at craig.lowe@duke.edu.