Tess Leuthner, a member of our fall 2018 cohort of TriCEM Grads, was recognized with the Dean’s Award for Excellence in Mentoring! Tess was one of three students selected this year for this prestigious honor, which recognizes those who improve Duke by embodying effective mentoring. Tess is a PhD Student in Integrated Toxicology and Environmental Health at Duke, whose TriCEM-funded research centers on exploring the role of evolution and the environment on mitochondrial DNA mutagenesis. Learn more about Tess’s research and more about the Dean’s Award for Excellence in Mentoring.

Brianna Petrone, a member of our fall 2020 cohort of TriCEM Grads, was recognized as a co-recipient of the inaugural Duke Microbiome Center’s Diversity Matters Award! This award recognizes people within the DMC that have made significant advances in diversity, equity, and inclusion. From the DMC email newsletter: 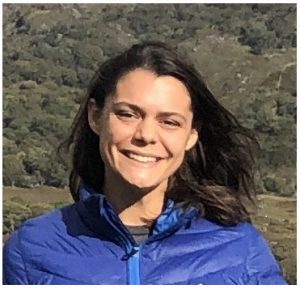 “Brianna Petrone’s receipt of the DMC Diversity Matters Award recognizes her as an exceptionally thoughtful and empathetic student leader in the Department of Molecular Genetics and Microbiology’s (MGM) efforts to highlight and combat racism. As a MD/PhD student in the MGM Program, she helped organize MGM graduate students in the summer of 2020 to express their concerns about racism, which prompted a departmental town hall meeting and subsequent faculty discussion. That in turn led to the creation of a MGM Department policy roadmap document for addressing racism, which underwent a half dozen revisions via a departmental working group involving students, postdocs, and staff along with faculty. Brianna has been instrumental in organizing that working group, applying the same skills she demonstrated in her basic and clinical research: insightful perspective, balance and empathy, and organizational acumen. This working group, which was recently named MGM Action Group Against Racism (MGM-AGAR), is now moving into the action phase of the roadmap with Brianna’s continued organizational efforts, making a real impact on anti-racism efforts in the MGM Department, and setting a sustainable blueprint for the group’s long-term efforts. For her initiative, commitment, and effective leadership in these important and ongoing efforts, Brianna Petrone is a deserving recipient of this inaugural DMC Diversity Matters Award.”

Brianna is a MD/PhD student in Molecular Genetics and Microbiology at Duke, with TriCEM-funded research on phylogenetic signatures of food-microbe relationships in the human gastrointestinal tract. Learn more about Brianna’s research and more about the DMC Diversity Matters Award.